On behalf of DCEDC, we are thrilled with Ferrara Candy Company’s selection of the City of DeKalb and DeKalb County for this new distribution complex.

DeKalb County’s sizable labor market extending throughout northern Illinois supports the development of new business operations and creates the opportunity to attract employees to live in our rich, dynamic communities.

DCEDC commends the City of DeKalb and DeKalb taxing bodies for expediting development and delivering prudent incentives that will expand the city’s economy for years to come.

Finally, Jerry Krusinski’s diligent and resourceful investment in making the ChicagoWest Business Center “shovel ready” for mega-developments like the Ferrara Candy Company was critical to today’s commitment to the DeKalb County economy. 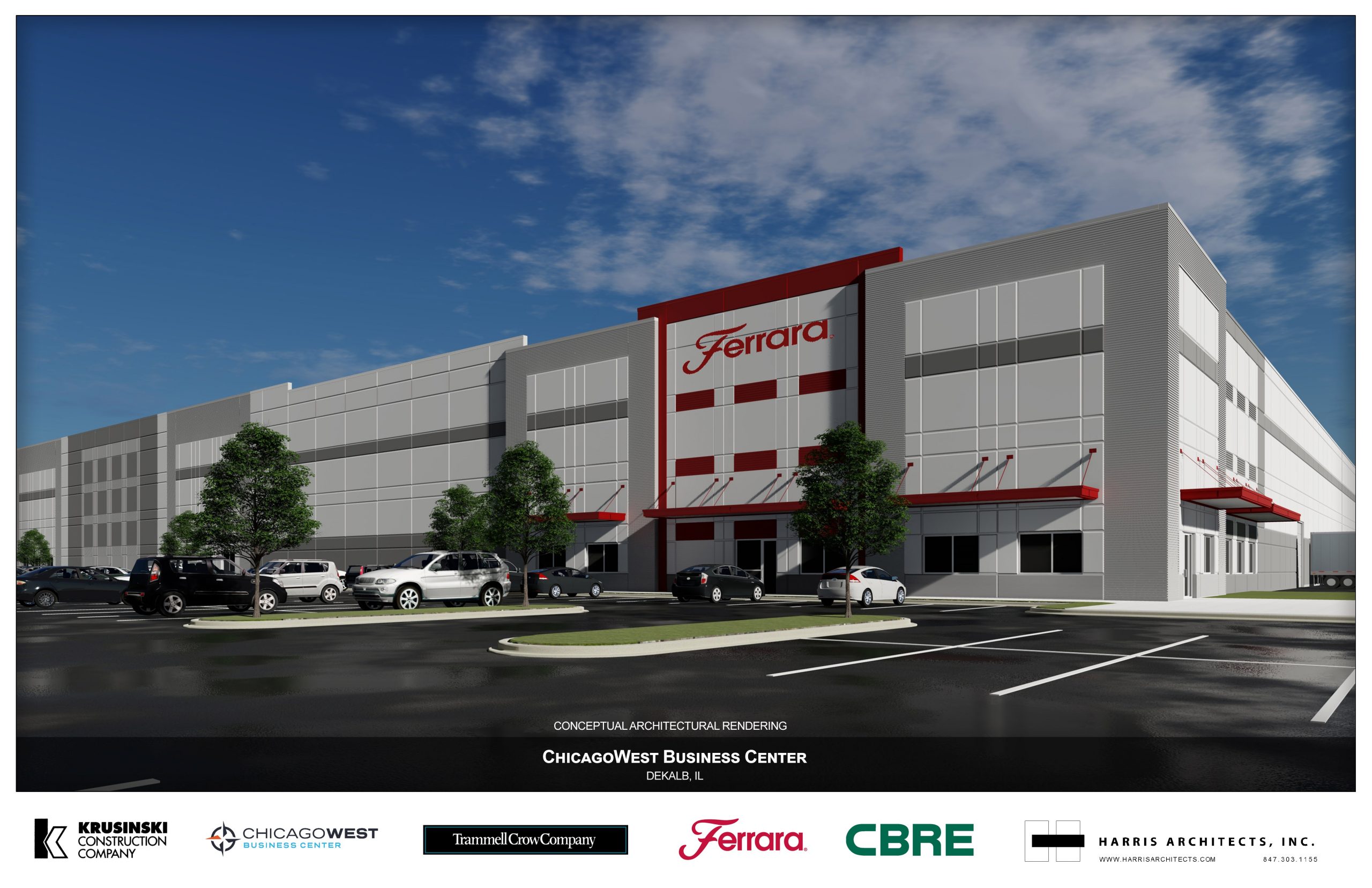 DCEDC will hold our Annual Membership meeting on Thursday, December 19th at 3:00 PM.

A recorded pledge or payment for 2019 is required to attend.  If you have not made your 2019 tax-deductible contribution, there is still time! Staff will be collecting year-end contributions before the meeting begins. 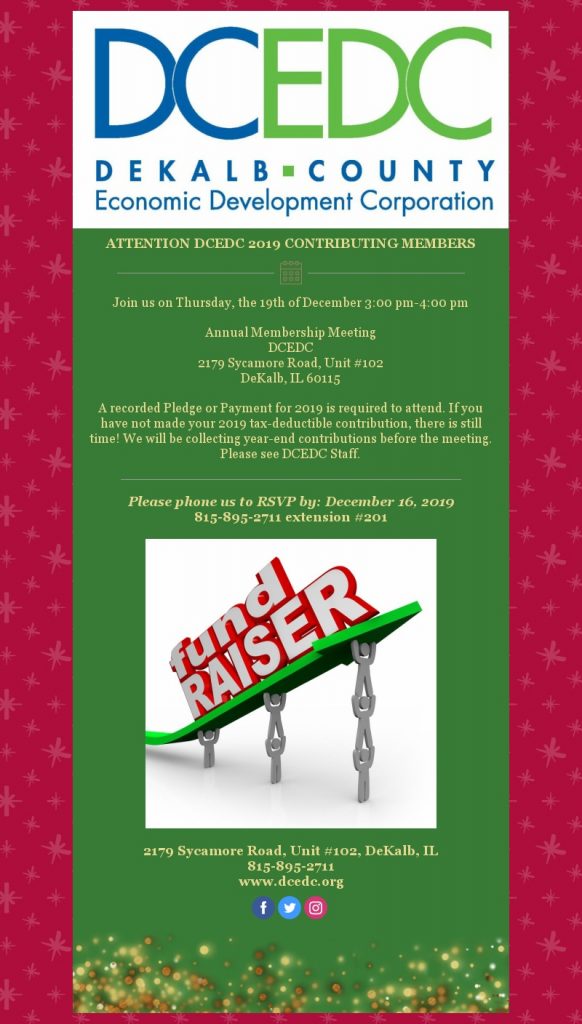 DCEDC is pleased to announce that Tim Suter, President and CEO of The Suter Company, Sycamore, IL will keynote this year’s event!

Please visit the Events page during the week of September 23rd to find out the details.

DCEDC members/caterers Tom & Jerry’s of Sycamore featuring Catering by Diann, Faranda’s/The Lincoln Inn, Fatty’s Pub and Grille/Fatty’s Catering Group worked together on providing a scrumptious menu of assorted appetizers, sweet treats and cool beverages. We sincerely appreciated all of you for helping us make the open-house so special!

As we grow to meet our County’s urgent interest in attracting talent, innovation, investment and development, we think that our expanded office space for recruitment activities will serve our board members and partners well.

We have put together a video of photos for your enjoyment! Thanks again to everyone for the ongoing strong support of our organization and the work that we do for DeKalb County, IL. *Google Drive has been used for the video*

DeKalb is bringing in business

Construction is underway at ChicagoWest to prepare for incoming companies.  Chicago area-based Krusinski Construction Company, which owns the ChicagoWest land located south of Interstate 88 along Gurler Road and Route 23, announced site development and ground work has begun on the 1,000-acre site.

Date posted: September 6, 2019 | Author: hoyle@dcedc.org | Comments Off on DeKalb is bringing in business

Interest from industrial prospects confirms a positive time to move forward as strong fundamentals and the Chicagoland industrial markets looks to DeKalb County, located in the western I-88 corridor.  Resources include a strong labor market and workforce partnerships with both Northern Illinois University and Kishwaukee College.

Competitive advantages that are beneficial to the industrial market include the DeKalb County Enterprise Zone 10-year Real Estate Tax Abatement, strong infrastructure, and a pro-growth atmosphere supportive of business development.

Hear from 3M’s Director of Supply Chain Operations WHY DeKalb County, Illinois is the largest 3M DC in the World!

Please go to the DCEDC Home Page to listen to Jason Dickinson, Director of Supply Chain Operations, 3M Corporation speaks to the importance of WHY DeKalb County, IL. https://dcedc.org/

Date posted: July 2, 2019 | Author: hoyle@dcedc.org | Comments Off on Hear from 3M’s Director of Supply Chain Operations WHY DeKalb County, Illinois is the largest 3M DC in the World!

Legislation creating a competitive operating environment to attract data centers was approved by the Illinois General Assembly this weekend and heads to the Governor for signature, according to the Illinois Chamber of Commerce.

Advocated by both business and labor leaders, the legislation creates tax incentives for the state’s data center industry in order to bring high-paying jobs to Illinois and create greater economic opportunities and additional revenue streams for communities.

DCEDC has worked with technology companies, developers and community leaders together with the Illinois and Chicagoland Chambers of Commerce to inform legislators of benefits of data center development and the need for incentives to compete with other states.

Data centers employ highly skilled computer and information technology professionals, many of which are educated at Northern Illinois University and Kishwaukee College. Data center development would provide attractive jobs enabling students to settle and raise families locally, strengthening and diversifying the DeKalb County economy and contributing to the Illinois economy.

Data centers are critical infrastructure facilities that store, process and distribute large amounts of data for a wide range of industries. Data center development would contribute to the local economy by providing high wage technology jobs and expanding the tax base to support schools, municipalities and other governmental services.

According to the Illinois Chamber of Commerce, “data centers generated approximately $321.7 million in state and local revenue in 2017. Additionally, Illinois boasted 31,500 high-paying jobs within this industry, as well as $54.1 million in construction labor income for 820 workers.” With the addition of incentives, Illinois and DeKalb expect to see those investment and job numbers grow.

DeKalb County is distinctly equipped to support data center development due to the availability of high voltage electric power from ComEd, abundant municipal water supply from the City of DeKalb, and virtually unlimited broadband capacity through a high-speed fiber-optic network built by Northern Illinois University, with the support of the State of Illinois and DeKalb County.

The data center development industry has shown great interest in DeKalb County, selecting the ChicagoWest Business Center as the last Illinois finalist for an 80-acre, $350 million Fortune 50 data center campus in 2013. This prospect was positively inclined toward DeKalb and Illinois, but instead selected an Iowa location to due to more favorable sales tax treatment. Since that time, most major technology firms have visited and seriously considered DeKalb, but instead developed data center campuses just over the border in Iowa.

“A recent study published by Mangum Economics for the Illinois and Chicagoland Chamber Foundations found that tax incentives were an important factor in data center development and have been passed in 30 states, including neighboring states,” according to Illinois Chamber of Commerce press release.

We are particularly encouraged by the actions of the Illinois General Assembly because DeKalb is currently a finalist for another data center campus codenamed Project Apogee. DCEDC is confident that a competitive operating environment will generate significant new data center investment, job creation and tax revenue.

For the second time, Northern Illinois University College of Business and DCEDC will partner in project IGNITE!

Up to five DeKalb County Economic Development Corporation member companies, local start-ups and/or local nonprofit organizations can easily hire NIU College of Business students to assist with professional tasks and projects during the school year.  As a hiring organization, you will pay just $500.00 for up to 35 weeks of part-time help from the fall 2019 hiring date through May 9th, 2020.  The NIU College of Business will generously subsidize student wages up to $10/per hour.

Now is the time for our members to access local up and coming business talent!  The deadline to apply is May 31st. Information is provided in the links, below.