DCEDC congratulates Sycamore City Manager Brian Gregory, on being named the next DeKalb County Administrator, effective March 1st.  Gregory has been actively engaged with DCEDC as our longtime Executive Board of Director, chairing our Finance Committee while actively supporting our work.  During his tenure as the City Manager of Sycamore, Gregory has been devoted and committed to the development and prosperity of the City.

We look forward to continued engagement with Brian in his new role at DeKalb County, and his continued leadership on the DCEDC Executive Board of Directors. 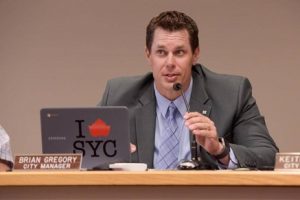 LEARN MORE ABOUT THE NEWS