Mike Cullen served on the DCEDC Board of Directors for many years, holding the role of President during his tenure.  Cullen is also a longtime supporter of the work of DCEDC.

The Annual Celebration Dinner encompasses the DeKalb Chamber’s Annual Meeting, recognition of new and retiring Board Members, induction of the Pioneer and Business Leaders Hall of Fame, and announcement of the Ambassador of the Year, Nonprofit Organization and Business of the Year Awards.  Last evening, longtime Chamber supporter and area businessman, Mike Cullen was inducted into the Chamber’s 2019 Hall of Fame.  DCEDC congratulates Mike on this tremendous honor. 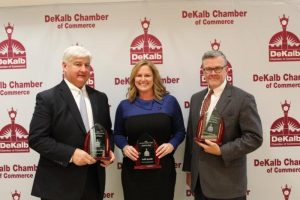