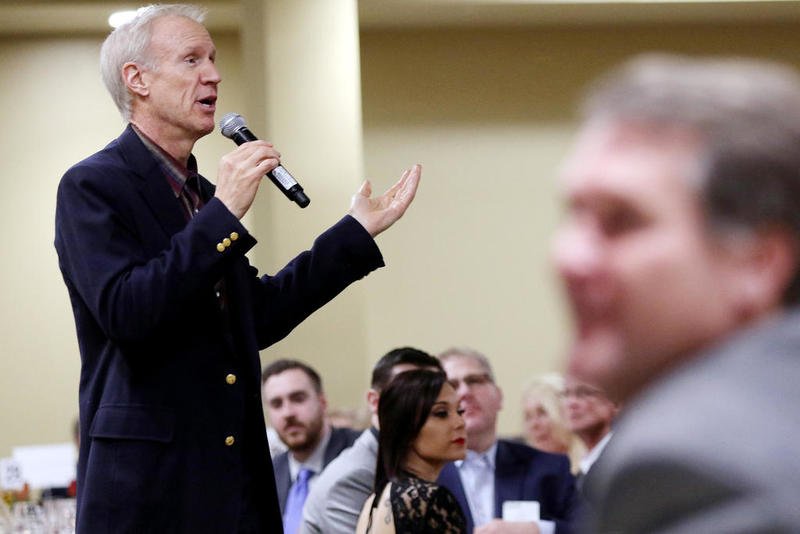 Gov. Bruce Rauner gave the keynote speech at the State of the County banquet Thursday at Faranda’s Banquet Center in DeKalb.

He said the county was the bellwether for the state of Illinois.

“How you guys are doing is how the whole state goes,” he said. He lamented the fact that companies are passing up Illinois for Indiana and existing companies are leaving the state.

Rauner said that with a few small changes in Illinois, the state could be very competitive in attracting businesses from around the country and world.

Rauner said many businesses told him while he was on recruiting tours of China, Japan and Israel that even if half of the reforms get done, they’ll move to Illinois.

“When Paul (Borek) and I were talking about DeKalb County in particular … it was a huge priority,” Rauner said. “It’s not going to take us 10 years or 20 years … within 18 months, we have a few changes, we’ll immediately get companies to come.”

DCEDC Executive Director Paul Borek gave a brief history of the businesses and business and industrial parks that have been built or expanded in the county in the 30 years since the creation of the organization. He spoke of companies such as 3M, which added 400 jobs in the past year and now has facilities totaling 2.5 million square feet in DeKalb; IDEAL Industries of Sycamore has expanded its presence at Northern Illinois University and now has 20 students working on new products and technologies; J6 Polymers of Genoa, which makes products for NASA, opened a larger facility in Genoa; and The Suter Co. in Sycamore is expanding its production facility and Ignatius Press completed a new design and warehouse facility in Sycamore, among other expansions across the county.

“This development created in 800 new jobs for the second year in a row,” Borek said. He said the developments have driven down the county’s unemployment to 5.2 percent, the lowest since 2007 before the Great Recession.

Borek noted that while failing to lure the Toyota-Mazda plant to DeKalb County was a big loss, it also was a learning experience, and the first time the county competed for such a large project. He said that the experience gained in that process means the county will be attractive to the next business looking in the area.

“There are always opportunities,” Borek said. “You have to be be able to respond quickly to present the site to a company.”

He said the county was especially well suited for manufacturing, distribution, and research and development ventures.

To increase the region’s competitiveness, Rauner said he wanted NIU and other Illinois colleges and universities to integrate more with businesses as they do on the West Coast and in Israel. To help universities recover from the two years of budget uncertainty and declining enrollments, he said he wanted to add $500 million into higher education funding.