Janet Gallagher, AIFD and Associate Professor of Horticulture at Kishwaukee College, was announced as one of three float judges for the 133rd Rose Parade at the Pasadena Tournament of Roses.

The Rose Parade, along with the annual Rose Bowl football game, is part of the annual Tournament of Roses celebration on New Year’s Day. This will be Gallagher’s first year in attendance, and she said her selection as a judge came as a surprise.

In February 2020, a representative from the Tournament of Roses reached out to Gallagher to ask if she would be interested in being a judge for the Rose Parade. Gallagher said a committee does independent fact-finding to explore potential candidates for the judge positions.

“You can’t apply. You aren’t nominated. There is a search committee that researches and selects candidates,” Gallagher said. “It’s humbling. How do they find an instructor from little Malta, Ill.?”

Gallagher’s lengthy credentials in floral design helped her stand out. As an instructor at Kish, Gallagher educates her students with real-world demonstrations of the floral industry. Through hands-on application, her students create unique floral arrangements that often support local events like the annual Kishwaukee College Foundation Gala. Under her tutelage, Kish students have received national recognition through events like the American Institute of Floral Design (AIFD) National Symposium.

Along with being a horticulture instructor at Kish for 16 years, Gallagher has been actively involved in the floral industry for 34 years. In the private sector, Gallagher is the founder and CEO of Designs by Janet — a special events floral company. She has been a member of the AIFD for 18 years, where she has served as both the National Education Chair and the National Student Chapter chair.

Floral displays created by Gallagher have appeared in various high-profile places and events throughout her career, from the Ellwood House in DeKalb to the White House in Washington D.C. Her selection as a judge for the Rose Parade reinforces the extensive opportunities available to students pursuing horticulture as a career, Gallagher said.

“I am really honored to be selected. It shows how broad this industry is, and if you stay consistent and involved in your profession, it can really pay off,” Gallagher said. “Our everyday things can seem very ordinary. But if you do them well and go that extra mile, you can turn it into something extraordinary.”

The 133rd Rose Parade will begin at 10 am Central time on Saturday, Jan. 1, 2022, and will be broadcast internationally. This year’s parade theme of “Dream. Believe. Achieve.” focuses on how education can open doors and change lives. Gallagher said her background in floral design and education made her a strong fit as a judge with this year’s theme.

Photo Caption: Janet Gallagher, Associate Professor of Horticulture at Kishwaukee College, was selected as one of three float judges for the Rose Parade during the Pasadena Tournament of Roses on New Year’s Day. 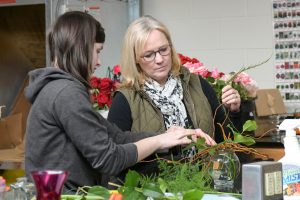