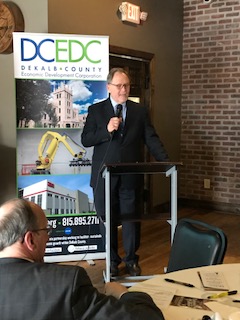 Mark Peterson proclaimed a “new day for economic development in Illinois” while visiting DeKalb County, recently. INTERSECT Illinois’ President and CEO proclaimed that the most innovative location in the world for food production is Illinois.

These and other facts about Illinois will be boldly promoted by the State’s private sector economic development organization (EDO). “We will no longer allow our neighboring states to define Illinois,” said Peterson at the DeKalb County Economic Development Corporation’s (DCEDC) Business Roundtable & Networking Luncheon on February 22nd at Fatty’s.

Before INTERSECT was created, Peterson observed, the state had all the ingredients of successful economic development; however, Illinois needed a statewide marketing organization to put the pieces together and pitch the message to businesses and site selectors.

INTERSECT Illinois is a privately funded organization established to work in partnership local communities and businesses to provide a unified, apolitical approach to business recruitment. Intersect is governed by an 18-member board consisting of the top CEO’s in the state and the country.

The private organization is designed to provide stability during political transition. This is essential as some business development projects evolve over 4-5 years or more.

INTERSECT can do things that even the best local EDO’s can’t do. For example, if DCEDC wishes to meet with a national out-of-state site selection consultant, it is likely that the consultant cannot allocate the time to meet with one county from Illinois. However, INTERSECT can organize a meeting with the Governor and several Illinois EDO’s and command the attention of the site consultant.

To respond in a timely manner to site selectors, INTERSECT has invested $180,000 in research software. These resources are available to assist local organizations with similar research needs. INTERSECT will launch a new interactive website in April. The website will have open source resources available to site selectors, businesses and local communities. Included will be information on all major development sites in the nation and detailed labor market data.

Over the past few months, Peterson has assembled a team of business development professionals and charged them to build relationships with the business community, EDO’s & national site consultants. He noted INTERSECT recently raised $1 million in new money. These resources allow INTERSECT to meet on short notice with businesses about development opportunities on short notice throughout the country or world.

These efforts are paying off. During 2017 Illinois logged $3.8 billion in investment and 50,000 jobs from 432 projects, ranking 3rd in the U.S. behind only Texas ad Ohio. This may be good for now, Peterson noted, but Illinois can double these numbers, as they did 10 years ago when 835 projects were recorded. Quoting Governor Bruce Rauner, Peterson said “There’s no reason Illinois shouldn’t be the fastest growing economy in the U.S.”

Despite what our neighboring states would like to have you believe, Illinois is the leading economy in the Midwest by a significant margin. The state will soon “reassert itself as rightful leader of the Midwest.” Illinois is about to announce several new projects secured at the expense of other Midwest states, Peterson stated.

Ultimately, in 4-5 years, INTERSECT would like to unite the Midwest states as a marketing block. United, the Midwest as a block would be the 4th largest economy in the world. For now, though, the top priority is to strengthen Illinois.

Peterson noted that DCEDC accompanied Governor Rauner and INTERSECT on as Asia Trade Mission to Japan and China. Why is foreign direct investment, or FDI, a priority? There are over 1,800 foreign companies operating in Illinois, 630 of which are Japanese. The United Kingdom, Germany and Canadian businesses are also major players in the U.S.

INTERSECT has a healthy pipeline of 65 projects currently, Peterson noted, including the Amazon second headquarters. Illinois made the final 20 in the Amazon competition. Win or lose, Illinois opened eyes about the strong technology environment.

Peterson efforts to staff and equip INTERSECT and fortify relationships with statewide partners is designed to build capacity and credibility with companies and site selectors, so that we have an opportunity to compete for all available projects. “If we get a good fair look, Illinois will win its fair share of projects,” said Peterson.

Peterson closed by encouraging all of us to be ambassadors for our state home, Illinois. We need to defend Illinois, because the Illinois economy is great and the state will succeed. We all need to communicate this message.

DeKalb County well positioned to help INTERSECT Illinois with this message. From barbed wire to broadband DeKalb County is Innovation, including:

These and other innovative, entrepreneurial businesses & partnerships prosper in DeKalb Co. We applaud the initiatives of INTERSECT Illinois and we look forward to working together to attract international and domestic business investment.