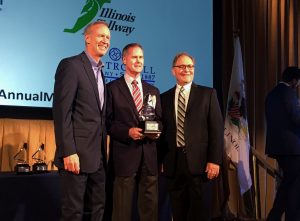 Target, the second largest general merchandise retailer in America, completed the $50 million conversion of their DeKalb regional distribution center into an “upstream distribution center” in early 2016. The operation handles seasonal and specialty merchandise for one-third of the U.S. To operate this national facility, Target has more than doubled employment from 350 to 750 workers, and they are continuing to hire. DCEDC coordinated the efforts of the Illinois workNet Center, managed by Kishwaukee College, to assist Target in promoting mass hiring events to staff this facility throughout 2016.

For the past 30 years, DCEDC has worked to expand and diversify the DeKalb area Economy. Since 2004, when Target purchased 119 acres of land to build a 1,500,000 square foot distribution center,  they have been a dedicated DCEDC partner by investing in DeKalb, operating the distribution center, employing area residents, and avidly supporting community activities. In 2011, the DeKalb Target Distribution Center was in the top tier within Target Corporation in efficiency, safety, and cost. Target noted that their success was due to the interstate highways, infrastructure, and labor pool and community partnerships that DeKalb County has to offer. DCEDC Congratulates Target on the success of its DeKalb Upstream Distribution Center!